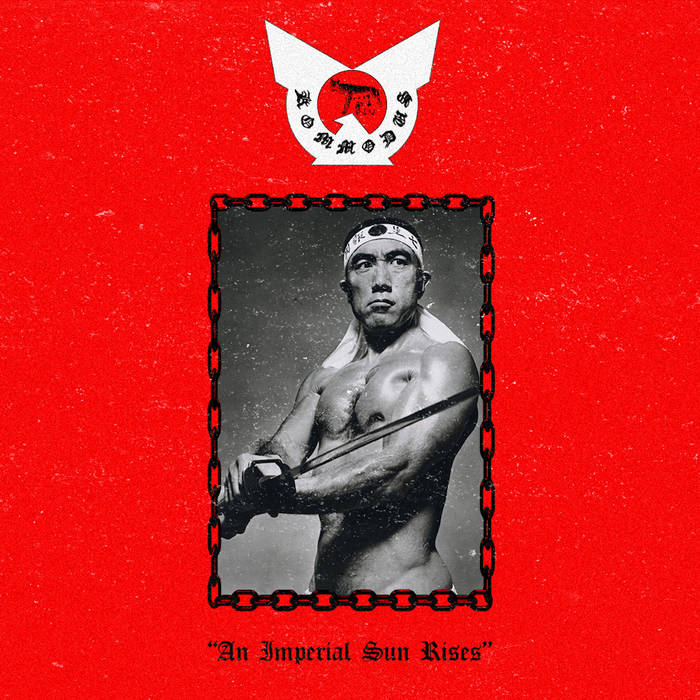 anthony williams What a fantastic release. I'm so glad i stumbled on this. Such dynamic passages that weave throughout the record make this record stand head and shoulders above the rest. Just wish i could get my hands on the cassette promo.

The Riddle of Steel

pissin in your elevator

Demonstration IV – the conclusion of a tetralogy. Goatowarex.


The Importance of Mishima:

When I think of Yukio Mishima, I think of one word: discipline. Here’s a man who never missed a deadline for his writing, or art. A man who identified the physical weakness within himself and sought to crush it.
In his short lifetime he left a body of work, a legacy that contained 35 novels, 25 plays, 200 short stories, and 8 volumes of essays. An amazing bibliography that assured him a place as Japan’s most celebrated author. An athlete who forged himself a new body from sun and steel. A pariah who disregarded the zeitgeist of his era – the erosion of Japanese tradition and the cultural pressures to transform the country into an emasculated leftist shadow of its former self. He contested his surroundings and matched his words with action, transforming his world to reflect his art. Training religiously, forming a militia, and ultimately immortalising himself through his work and through his death. Total commitment, total belief. Mishima had the drive and vision to make a poem out of his life. And in our contemporary era I think there is much to learn from him. To attempt to attain and exercise that same monastic drive in our own chosen paths. To have the sheer will and faith in ourselves to ignore all the ephemeral influences, distractions, and rabbit holes that are shoved down our throats, that obscure our focus, and derail our progress. To recognise and understand what it is we want and attain it, to attack it mercilessly until we are synonymous with it. How can we change the world if we can’t first change ourselves with discipline, determination and steadfast focus?
News, politics, social rhetoric and trends it’s all agenda and half-truths. Instead, we need the glorious sun, that defined our earliest incarnation of gods and goddesses. We need the steel to make us stronger and conquer. We need Mishima.

Engineered and mixed by Count Hoggeth Palmeri and Liam Kriz.

Will and sincerity derived from body, from a flesh and tissue home
From a warrior lineage, an ancestry from where the four rivers flow

Spiritually divided into quarters of practice
Rising up like a radiating disk, shining outward
Reaching out like the honed limbs of man
To practice the uncompromising and ancient code

Cleansing a national osmosis of weakness, waves crashing against a saccharine shore
From an ancient meridian, from a cerulean confederacy of four
Unmatched, unrivalled in discipline or action, a defender of the imperial faith
Leading by example, the tip of the shield, wielding an iron which-will never break

Let the four rivers flow
Track Name: Total Cosmic Nihilism
Generations buried in soil, lives and passions consumed by worms
The sun sears and tides rise higher, fissures form
The end in sight, there will be no providence, no deliverance
No love, no hate, no redemption, life erased


The cycle concluding, images shine in the face of a cold dead sea
Echoes that mean nothing, a universe devoid of meaning
All that matters is the shedding of skin, the carving out of stone
To find a beauty in blood, to propel onwards like a storm in the night

Man will be cut down like ears of corn in harvest
And drown in the chaos of the earths final purge
A global holocaust, the serpent has come to eat its own tail
No bird will fly, no fish will swim, and no boat for man will sail

In our twilight all that remains is a reflection of a romantic iron past
Engulfed in the mist of the final day, we can only rise, howl, and laugh

I can now see that the world cannot breathe
Under the weight of man and his seed
The last branch of heroes await their final hour
As final phase entropy leaves the weak to cower
Track Name: Acolyte Ignite
Eclipsed by an insurmountable beauty of gold
Reflecting one’s own born fettered weakness
Exact revenge on the erected epitome of contrast
Summon the flames of purification

Amongst the gilded ashes the ugly subject succeeds
Destroy the beauty mocking those who live and breathe
A spurned unrequited love, of man and monument
Immolate holy perfection, the temple of the golden pavilion

A new generation, a former shadow of themselves
Instinct and spirit subdued to appease foreign dominion
A military and empire disbanded, a culture reduced to a whisper
A country left on its knees in the face of near annihilation

From the rubble of defeat, a warrior of sun and steel rises
An archetype, a leader, an imperial star
Total commitment, total belief, total discipline
He inspires a return, to the heights of ancient majesty

Marrying words and action, training relentlessly
Preparing a youth, a militia, for a war that’s yet to be
The enemy’s siege on the sun, to bring a premature night
Crush the binary, turn life into a poem, ascend as is your rite

The time has come to worship the will to power
A small night storm blows, saying, 'falling is the essence of a flower'
Preceding those who hesitate, remember thine fallen
His life will be remembered, we will spread his calling

Bandcamp Daily  your guide to the world of Bandcamp

Featuring Gary Bartz, 5 years of Rhythm Section Intl and an LP of the week by Nicolas Jaar